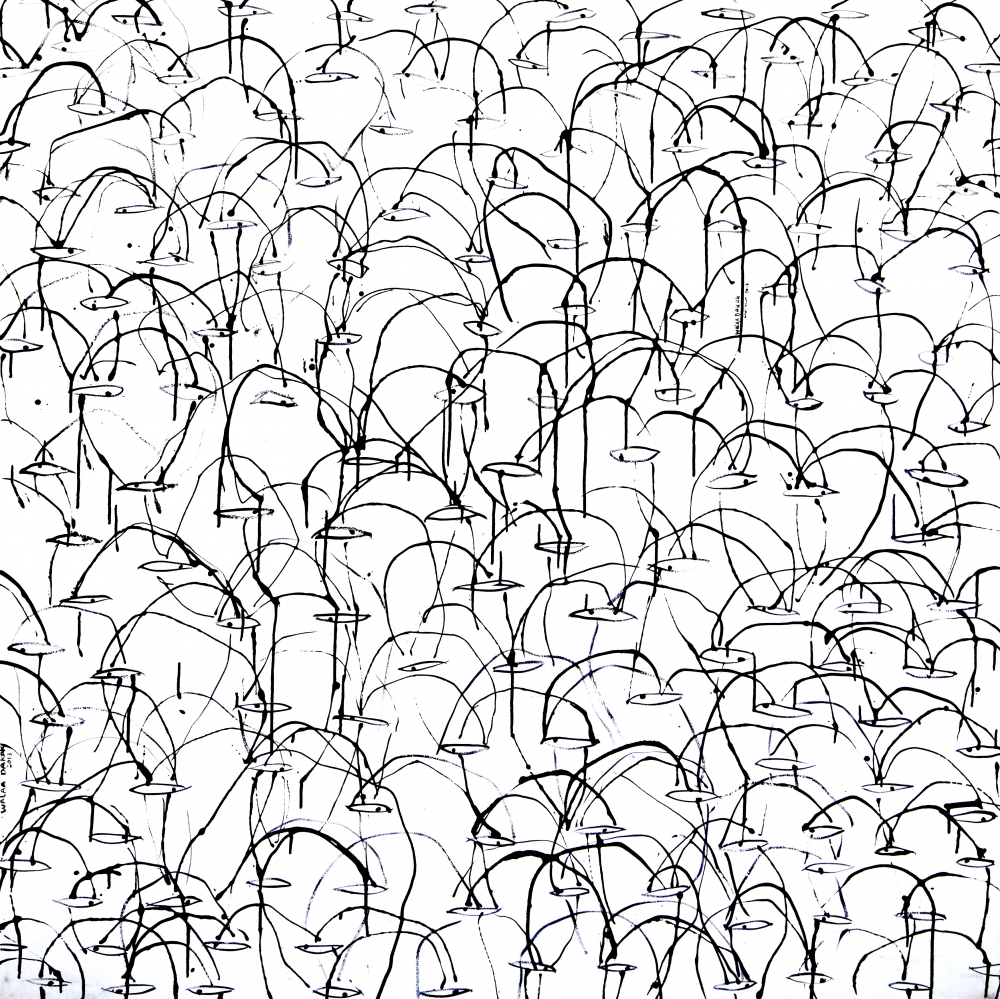 Born in 1979 in Damascus, Reem Yassouf graduated from the Faculty of Fine Arts in Damascus, before moving to France in 2015. She works in numerous media to create multi-layered works that reflect the psychological complexity which she explores through them. 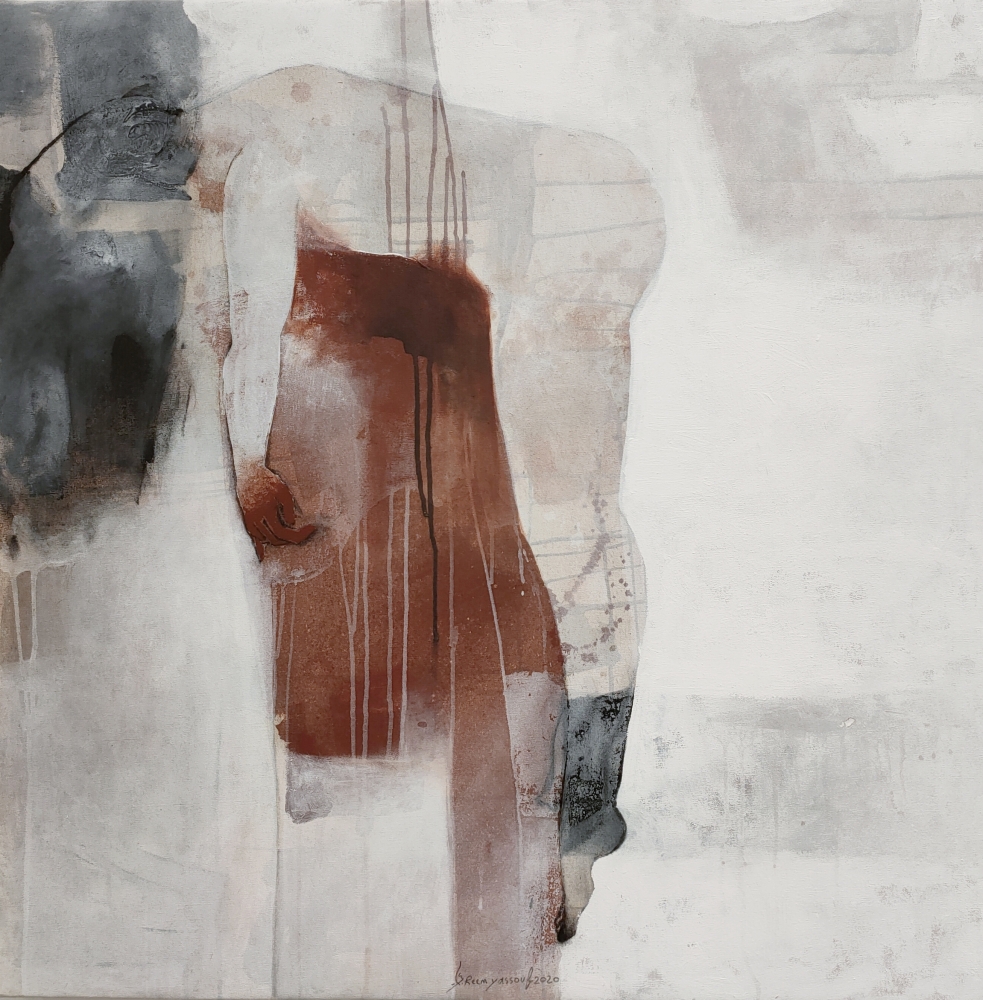 Exhalation here is the liberation of a body inside a vacuum comprised of layers between light and shadow. Exhalation after a deep inhale carries confusing and painful details from a dark place, where ideas of chaos are intertwined with the sound of screaming in your head. The work symbolises the continuous cycle of inhalation and exhalation around the hour, a permanent struggle between gravity and lightness, as if the prospect of beginning and ending were on repeat every day.

This work comprises different materials on canvas. Its main technical focus is the movement of colour and the abstract line within the boundaries of the image plane, with transient details of a body that permeates the artwork inside its many layers. Between fading and clarity, it introduces formative problems of the logic of the eye (do we trust what we are seeing?) through strange movement that gives the viewer the feeling that they are either falling or suddenly arrested and stopped in the midst of a quick movement. 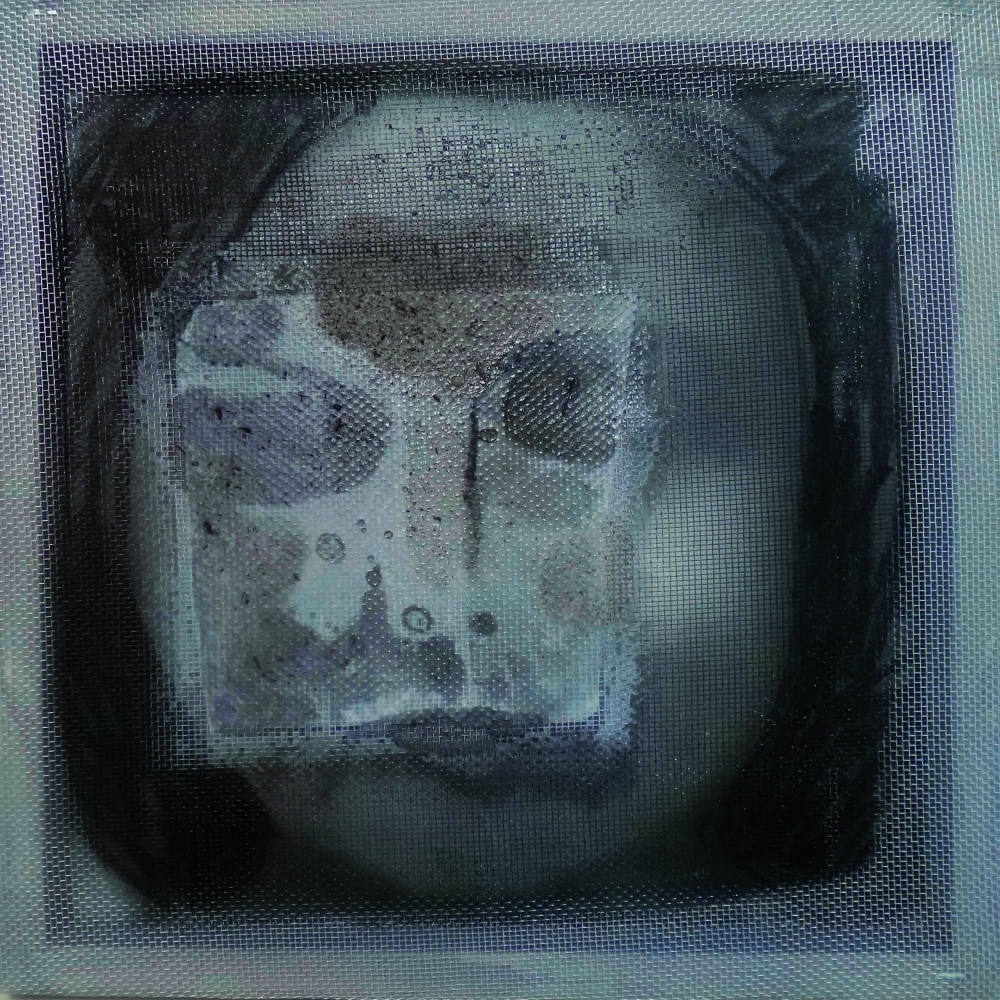 This work is about the moments of waiting for a little girl, before she is rescued from the rubble. These fragile feelings, hovering between life and death, breathing or suffocation, create a vacuum separating the image of her true face from a fictional version that represents layers and images of memory, proving she is still alive. Sit is as if she hears a voice: “Do not fret – I am here”. This trapped girl represents a moment of resistance in a reality of destruction following a disaster, silence, weakness, and the cruelty of being alone. The truth here is cold and light is the warm moment.

Working with a wooden box in a cold grey cement, the work comprises two basic layers. The first, a foggy picture of the girl, which I created a photograph of myself as a five-year-old. This was then collaged onto canvas and different materials were used to create the feeling of distance before installing a second layer made out of metal mesh. This transformed the image and made it blurry. The artwork can be seen from different angles, as the space between the two layers leaves us free to choose the angle from which to discover work. 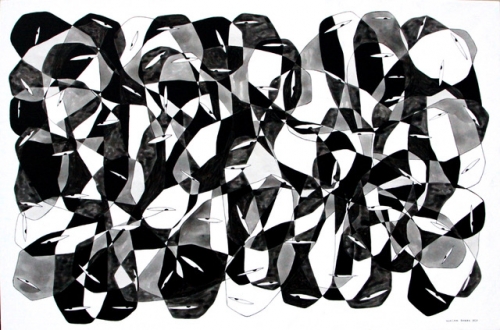 Walaa Dakak was born in Damascus, from where he holds a degree from the Faculty of Fine Arts. He went on to pursue a masters degree from the University Paris 8 where he has been based since 2004. Dakak’s works address the evolution of censorship, and he is fascinated by surveillance and, subsequently, paranoia. In his works, he asks questions such as: What does monitoring mean? How to embody everything that surrounds us in a visible or invisible way? How does it later transform from an external control into an internal one that a person exercises on themselves? What is its effect on the relationships between individuals? 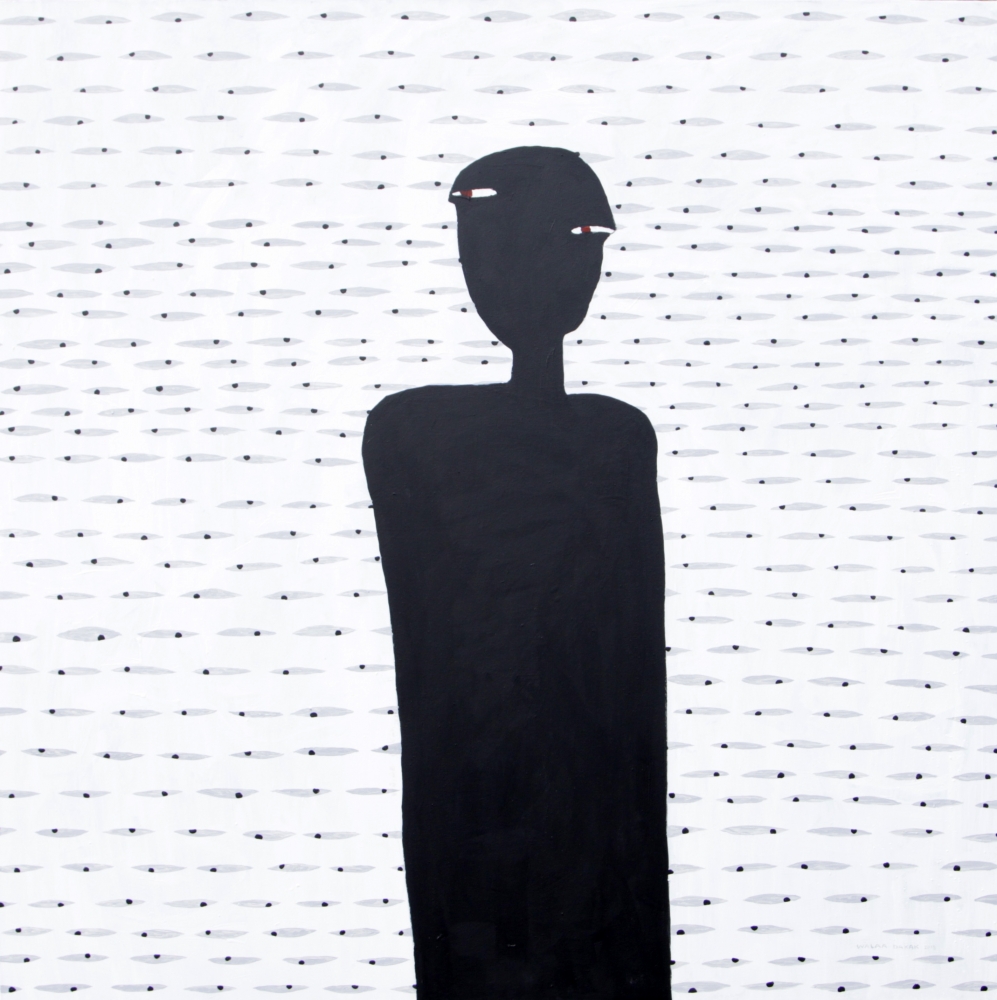 Human societies have known censorship ever since power was exercised over people and it has evolved as humans have evolved. Growing up in a society that was subjected to a dictatorial regime like that in Syria, where fear constantly accompanied us, all of our activities were subject o surveillance, which has left its impact on my life and artistic production. To paraphrase Michel Foucault: The very act of being observed means that you are considered in the wrong and under punishment or even worse, you are observed in order to make mistakes. Here one loses ones self-confidence and becomes a prisoner of actions and reactions.

I started working on the Surveillance series, from which this work is from, in 2010. I was watching people's eyes, wondering if they were watching me, which prompted me to start taking these people out of my house and get rid of them by drawing. Initially, I worked on bodies and faces, reducing the details, in which there are only eyes waiting for people who watch their shadow always. The paintings were inspired by my memories of stories about censorship told by my friends in Syria (the supervision of the neighbourhood, friends, family, and the control of the political system etc). I was also inspired by novels and films that dealt with this subject, the most influential of which is of course George Orwell's 1984. Later, I gave up using colour and started using only black and white. The body was removed from the painting and I focused solely on the face, which was the further reduced to only the eye. 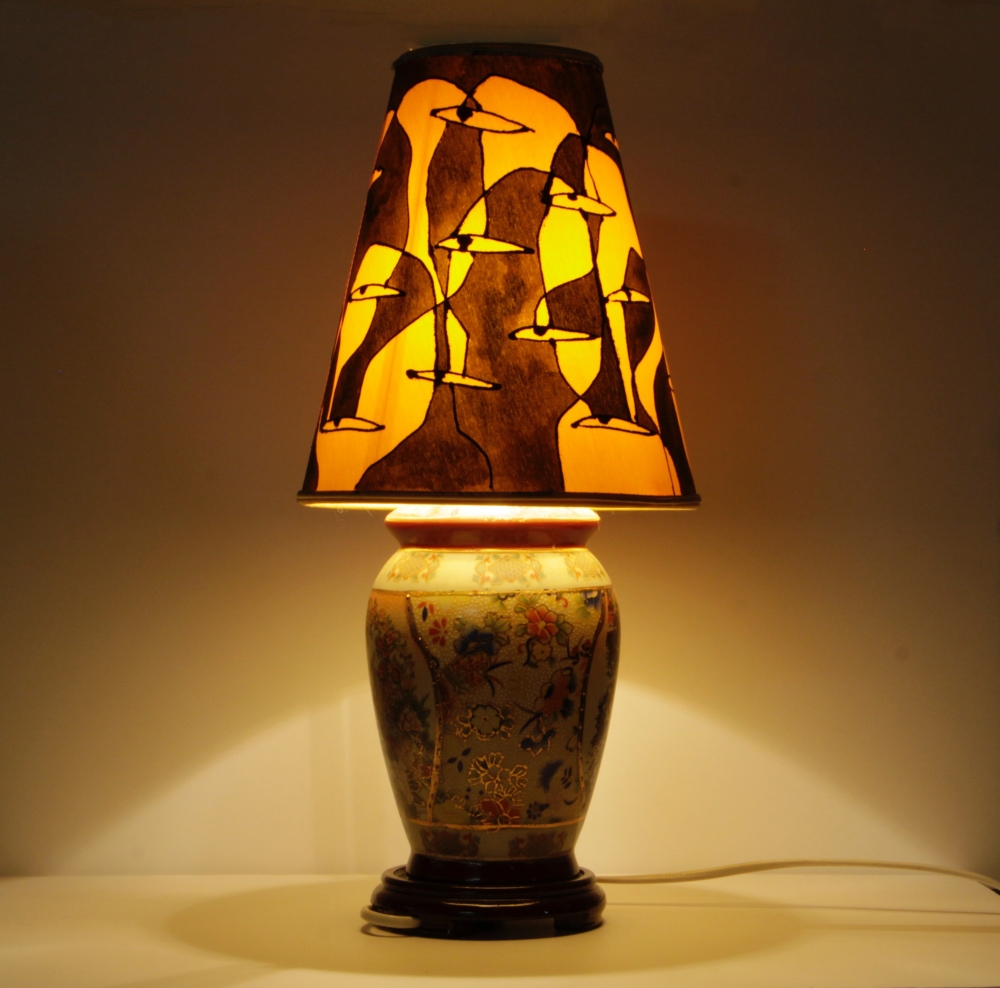 How do the powers that be use public or private spaces to foster fear (consciously or unconsciously) through works of art (images and statues) to strengthen their authority over people? Especially in a society that plasters images and statues of the nation’s dictator president everywhere in a desire to imprint that image in our minds? If you see it everywhere then it becomes mere decoration, and, with time, a systematic brainwashing that succeeds in forcing people to succumb to the ruling authority.

Through the Décor of a Dictator project, I sought to track the impact that monitoring systems (be they political, social or religious), have had on my artistic work and on myself. I examined the methods used by dictatorships to promote fear through installation work and drawings on curtains, lamps and home furniture. Light has been an essential presence in the work as it often penetrates the blind eye, leaving on the opposite wall a sharp shadow. Also, this ‘eye’ shadow can fall on and penetrate the viewer’s body. 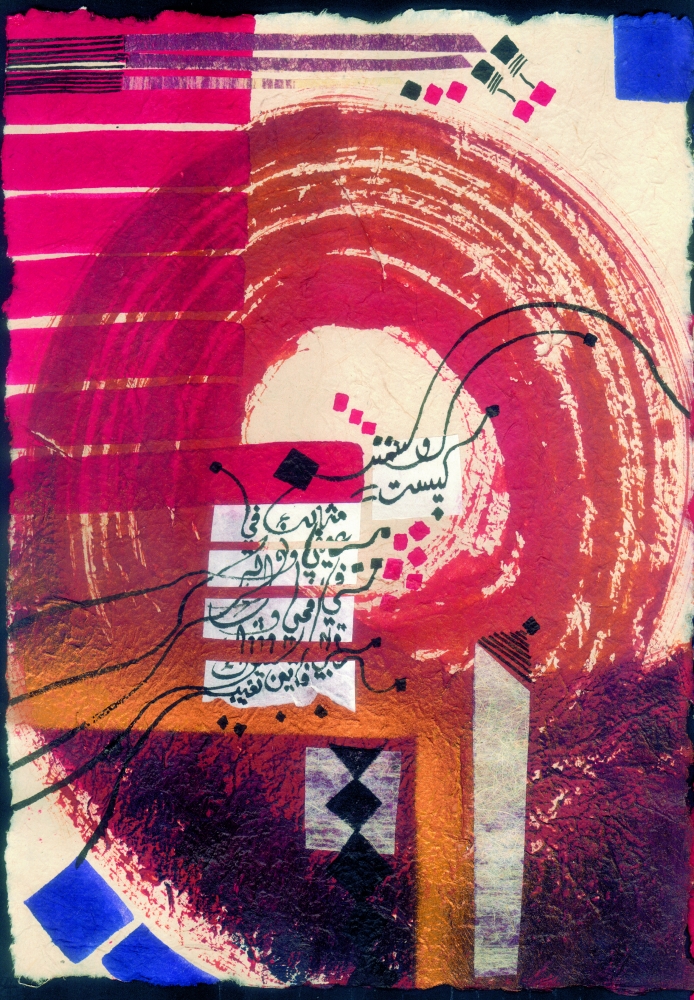 Born in Syria in 1978, Ola Abdalla spent her childhood in Paris, before pursuing her studies at the Faculty of Fine Arts in Damascus, before moving back to Paris in 2001. Her work explores Syrian light, as seen through landscape, in an abstract painterly style focused on colour and space.

This work was basically an exercise – I had no prior idea of what would result in form or colour, and my goal had been simply to create a balanced composition with the “unreadable” line. That is, for me, the collage method, which frees the line from its first task (of delineating) in order to become an abstracted visual form that helps me find a visual balance. Variation is part of a series consisting of 10 works, created out of ink and collage on handmade rice paper. 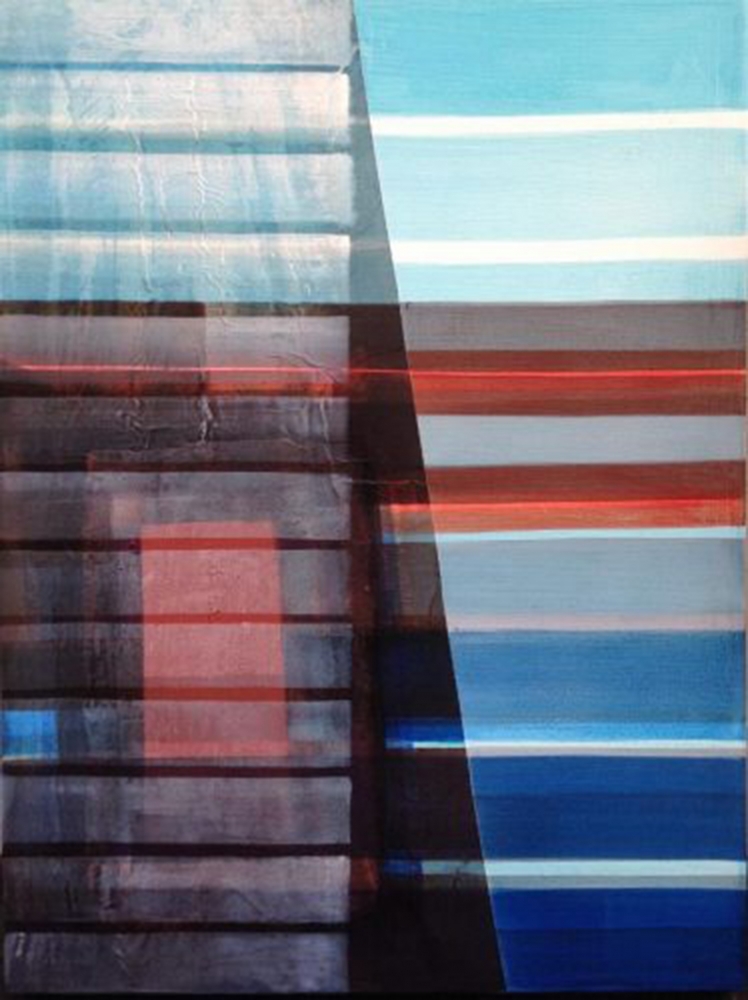 This was from a small series of three paintings on the colour blue, from one of the last years of my artistic production. In this experiment, the coloured space takes on the role of shaping the painting, whereas now the line is there only to define that space and organise its visual relationships. At this point in my work, the main subject had become colour itself, and how, with careful gradation of tone, it can open a window to freedom of imagination.