Beirut. A city that has been on many of our minds in recent weeks and months. A city that has, throughout its history, been a meeting ground of cultures, ideas and, often, clashes and revolution. Beirut. A ‘sister city’ of sorts to Damascus, with its shared histories, geographies and experiences. It is Beirut which we explore in our second city-focused issue, a city that both nurtures and exasperates the creative talent that resides within it.

Many of the Syrian artists living in Beirut whom we feature in this issue have also been both invigorated and frustrated by the recent protests there: enlivened by the spirit of change, yet frustrated that this was not their fight. Several were out in the streets with their Lebanese brethren, including Sleeping With the Enemy, whom we profile here.

The issue begins with a trio of short essays by Saleh Barakat, Mouna Atassi and Abdullah Alkafri – together, they provide a multi-dimensional view of the at times symbiotic relationship between Beirut and Damascus, two cities who give and take in turn.

We also interview Anas Al Braehe on the psychology of colour and feature a personal essay by Mohammed Khayata, who speaks about his experience moving to and settling in Beirut. Mohamed Al Mufti talks us through a selection of his fantastical, architectural and symbolically-laden paintings, as does Azza Abo Rebieh, whose new works build on her dramatic etching technique, now crafted out of tulle and string.

Furthermore, we are delighted to announce the winner of our open call for essays on Syrian artists in Paris as Nour Asalia. Her essay will feature in the next issue of The Journal, and marks the first of our bi-annual writers prize. Read more about it here. 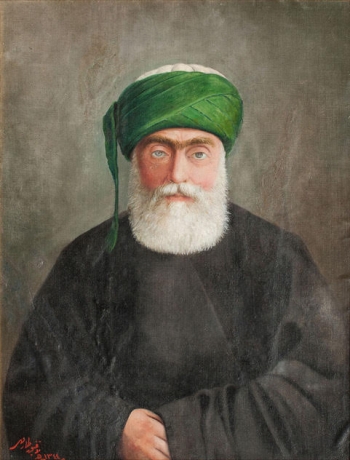 Circumstances and Issues of Syrian Art in Lebanon

"I still believe that art was – and always will be – a document and a visual testimony that recounts the history of peoples. I also know that what I’m saying is not new and that perhaps it has been repeated by many before me. Nevertheless, and while we are about to publish this issue of our journal, which is dedicated to the artistic activities of Syrian artists In Lebanon, we must bring back to mind the historical and cultural circumstances (as well the social and political conditions) that have led to the fate of art and artists under those very circumstances in both Lebanon and Syria."

A Tale of Two Cities: Beirut and Damascus

For our special Beirut-focused issue, gallerist and curator Saleh Barakat pens an introductory overview, setting the scene and laying out the close art-historical ties between Lebanon and Damascus, from the Modern through to the Contemporary period. 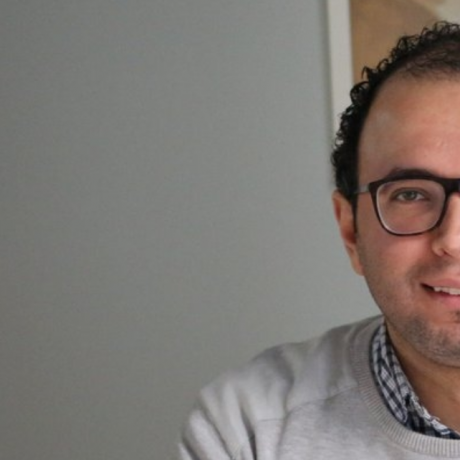 An Informal Attempt to Contradict the City

The city exists as a space in a void; a space that welcomes strangers, and then, infatuated by the possibilities of chance, redefines them and suffuses them with a sense of the dramatic. When that city is Beirut, the result of unlimited intersections between the idea of a capital city and the realities of conflict, its borders and definitions dissolve and become invisible. 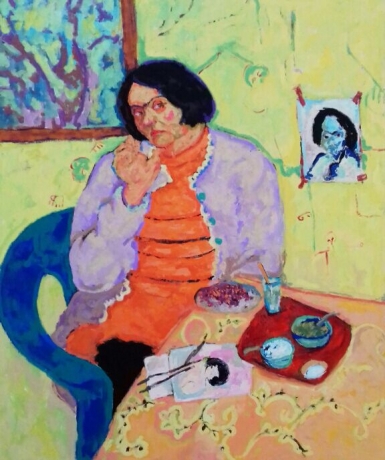 The Colours of the Mind

Multidisciplinary Syrian artist Anas Albraehe studied painting and drawing at the Fine Arts University of Damascus, graduating in 2014, before relocating to Lebanon. Here, the following year he completed an MA in psychology and art therapy at the Lebanese University. This interest in the mind is evident in an oeuvre comprising painting and theatre performance, and which explores the psychology of colour as well as the glance of the other. Anna Wallace-Thompson asks him about how colour reflects psyche and the changing face of portraiture and our image of self in an ever-evolving digital world. 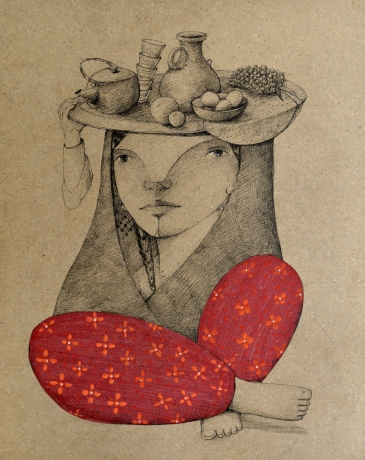 All The World’s a Stage

In 2012, then a fresh arts graduate, Mohamad Khayata travelled to Lebanon for an exhibition in Tripoli. That trip, as for so many, has turned into a semi-permanent migration, and Beirut has become Khayata’s home. In the intervening years, his practice has evolved from photography to encompass mixed media, painting, sculpture and music, often combining paintings within his photographic work to produce a multi-layered exploration of identity and nation, often revolving around an on-going motif in his work: the maddeh, or patchwork quilt, which functions as a metaphorical and also literal reflection of the artist’s desire to stitch Syria back together. Khayata explains the process to The Journal, his experience moving to Lebanon in 2012 and the evolution of his artistic practice.

Born in Damascus, Mohamed Al Mufti is an artist, architect and a professor at Alba (Académie Libanaise des Beaux-Arts). He moved to Versailles, France in 1994 to pursue his studies in architecture, where he graduated from ENSAV (Ecole Nationale Supérieure D’Architecture de Versailles). Mufti held his first exhibition in France in 2003. Soon after, his work was featured in galleries and museums in France, Italy, Finland, Turkey, Lebanon, Syria and the United Arab Emirates. In 2012, he moved to Beirut where his work depicted themes and reflections on Syria’s political and social scene. As a documentary artist, his work is an inspection of the urban landscape and its symbolic architectural structures. 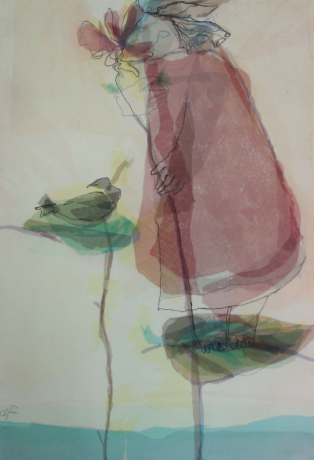 Born in 1980 in Hama, Azza Abo Rebieh graduated from Damascus University, Faculty of Fine Arts (Etching Department) in 2002. She has also won multiple other awards such as first prize in the Annual Youth Exhibition in Damascus 2006 and the third prize at the Colour of Damascus Exhibition 2005, Italy, curated by The European Commission Delegation. Her work has been exhibited in Damascus, Beirut, Paris, Rome, Istanbul, Sofia, Uzice, Barcelona, Vaasa, London and Chicago and has been acquired by institutions includding The British Museum and Atassi Foundation. 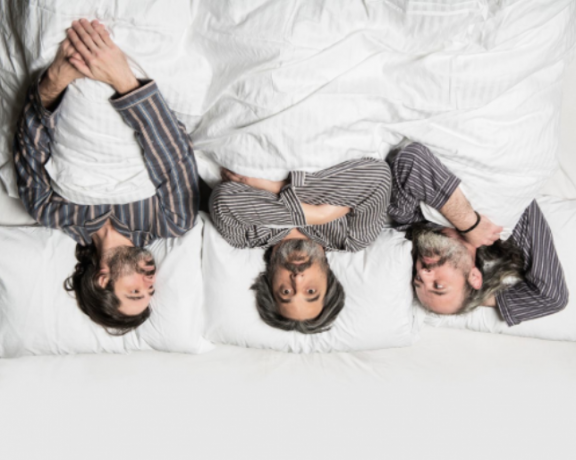 The Art of Solidarity

Sleeping with the Enemy in Beirut

Imagine a space in which artists can come together, share ideas and inspirations, and put ego and competition aside. Imagine a space in which questions such as “but what if I can’t sell this work” and “can I really afford to focus on what I want to do?” are not issues. Imagine a space in which artists can give in to pure, unbridled creativity, safe in the knowledge that all the fruits of their labour will be shared amongst them equally. This was precisely the ethos behind the Sleeping with the Enemy project, founded by Syrian artist Semaan Khawam and Lebanese Fadi El Chamaa. Working with Syrian Ghylan Safadi in their first iteration, and Lebanese Sara Chaar in their second, to date, the initiative has brought been a resounding success. The Journal spoke to Khawam to find out more. 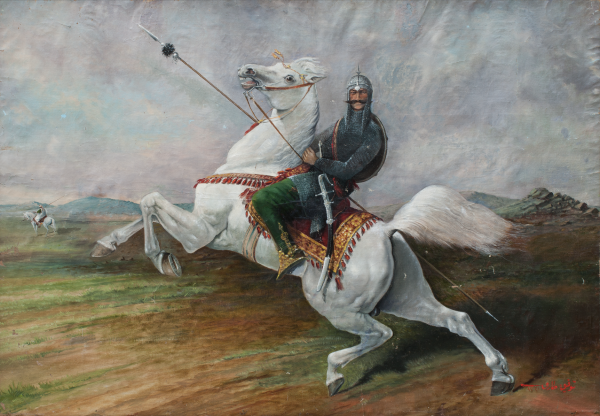 In line with our goal of creating knowledge around modern and contemporary Syrian art, The Atassi Foundation is pleased to announce its Art Writing Prize which is awarded twice a year to art historical essays on topics related to Syrian art.