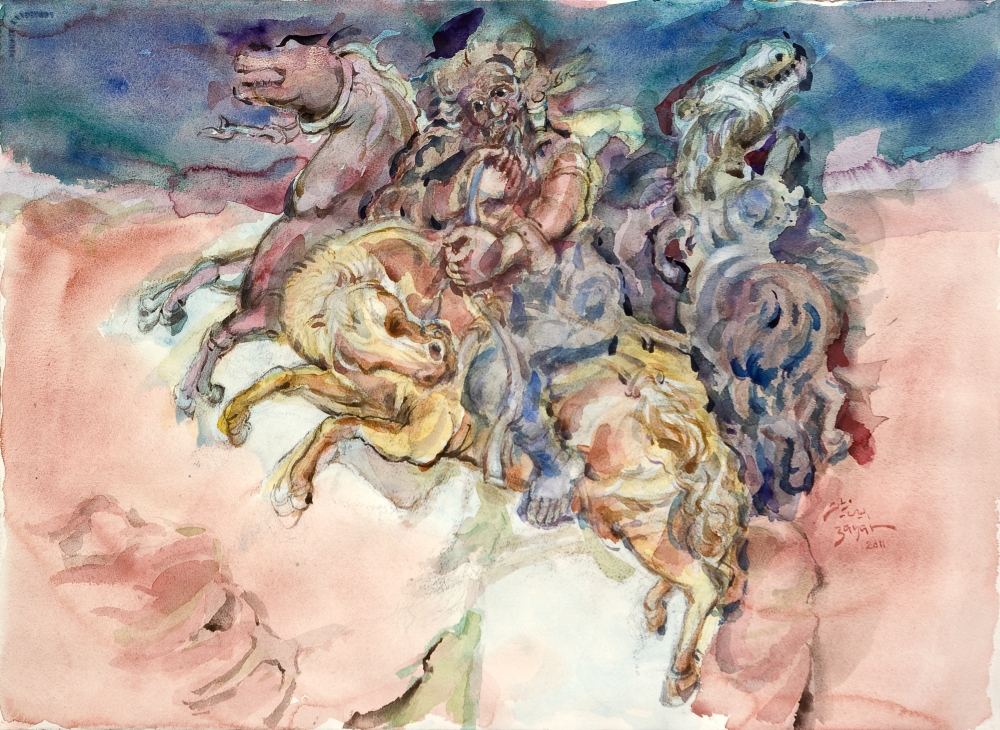 The tale of the deluge was first illustrated in Mesopotamian myths; where it was best told in the Epic of Gilgamesh around five thousand years ago. The Old Testament later on, as well as the Holy Kuran portrayed the story of the Deluge and its hero Noah.

The significance of the story is that the Deluge was inevitable so that the universe would be reorganized and honorably reconstructed after it was flooding with wickedness and darkened by falsehood.

In my paintings I was inspired by this tale without committing myself to a certain literature text. On the contrary, I tried to interpret and illustrate it in a compositional imaginative context which resulted in an interlaced composition of colors and figures; where the dominated ruby, jet black and shining gold were spread over the canvas, while violet, brown and dark blue played a necessary role as separators yet coordinators in the composition of color, as it was required by both the vertical space of the canvas and by the colorful musical tunes instinctively envisaged to me while I was painting.

From a figurative aspect, my figures were racing with berserk horses; running from the right towards the left side o the canvas, where also floods and ruins are also scattering as the tremendous city failed to withstand the event.

In my painting I used Palmyra as a metaphoric virtual stage deploying its Arab-Syrian authenticity and local identity in the era between the first century BC till the third century AD, as I used the figures of its ancient Gods who came from both Mesopotamian culture and old Arabic religions.

I imagined the story of the Deluge taking place in Palmyra since the Head of Palmyrian Gods is Baalchmin- God of fertility, rain and storm, besides Jipol “Ajlaboul” God of the moon and Arehol “Yarhaboul” God of the Sun, not forgetting the female Gods as Ishtar, Allat and Ninaii.

Moreover, seeing that I was not using a literature description of the event in my painting and knowing that I intentionally didn’t determine the identities of the ancient Gods, the shapes came out as symbolic figures expressing themselves in Sufi dancing glancing to the upper world optimistically believing that “the best is yet to come”. I regard their resilience to the flood in the form of promising branches of a tree, a kite and wings of eternity.